Urgent: the Music of the Continents company is looking for classically trained singers in the Kansas City area for an amazing opportunity to sing with Grammy-nominated conductor Vladimir Gorbik.

Would you like to sing a concert of Russian Sacred Music under the direction of Grammy-nominated Russian conductor Vladimir Gorbik?

A Concert of Russian Sacred Chants to be performed in KC

A unique conert of Russian sacred chants is set for Sunday, October 31st at 7 p.m. at the Holy Trinity Orthodox Church in Overland Park, KS.

Because - Russian or American - each one of us wants and prays for "peace on Earth and good will among men."

This concert is a collaborative project between Vladimir Gorbik - (Moscow State Conservatory), Vladimir Morosan (editor and publisher of the multi-volume series Monuments of Russian Sacred Music), the Holy Trinity Orthodox Church in Overland Park, and professional singers from the Kansas City area.

The concert organizers are hoping to share the treasures of Russian sacred music and texts with their listeners and transport them to a world of beauty and spiritual peace by uniting together: Russians and Americans -  in pursuit of beauty and peace.

All the pieces have been carefully selected to reflect beauty and a timeless spiritual reality so important in times of uncertainty.

Tickets are available for purchase here.

Founded in 2018, Music of the Continents (MOTC) is a young organization, whose goal is to unite the world through beauty, music, and prayer for world peace. MOTC unites like-minded musicians of international calibre under the motto of "Make Peace and Music."

The man behind MOTC is Vladimir Gorbik - a Grammy-nominated conductor, as well as a life-long lover of choral and symphony music.  MusicWeb International named his 2018 CD "Teach Me Thy Statutes" Recording of the Year.

Vladimir Gorbik is a sought-after world class international choral and symphony orchestra director and creator of several music organizations, including MOTC and the Capital Symphony Orchestra.

Vladimir enjoys sharing his passion for Russian music with the world and has held numerous masterclasses and concerts all over the globe, including in Europe, USA, and Australia. But he's always had a special place in his heart for all things American, and even learned English as an adult.  He especially enjoys Kansas-style BBQ.

Vladimir has a wife and 10 children. They all love to sing in harmony on long car rides. 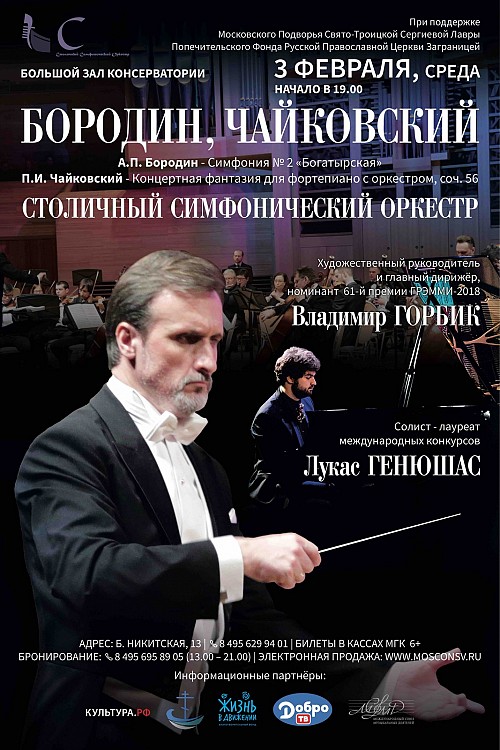 Announcing: Gorbik and Genushas set to perform on February 3rd

On February 3, 2021, the Capital Symphony Orchestra conducted by Vladimir Gorbik with special guest pianist Lukas Geniushas will give a concert in the Great Hall of the Moscow Conservatory.  The Second ("Heroic") Symphony by Alexander Borodin and Peter I. Tchaikovsky's Concert Fantasy for Piano and Orchestra will be performed.

This concert program is both conservative and daring.  An epic masterpiece which largely determined the fate of Russian symphonic music, and a little-known, surprisingly fresh page in the history of piano concerts.  What unites these works?  First of all - the uniqueness of the Russian style and extraordinary courage in dealing with traditional European genres.  Tchaikovsky and Borodin harmoniously combined the features of different cultures and went - each composer in his own way - to acquire his own language and acquire the "Russian spirit" in their music.

The Capital Symphony Orchestra is a relatively young organization, created in 2017 as an international project. Vladimir Gorbik is the orchestra’s Founder, Artistic Director and Chief Conductor. Maestro Gorbik is also a senior lecturer at the Moscow Conservatory, and he has an extensive record of creative activities both in Russia and in America.  In 2019, one of Gorbik’s choral CDs “Teach Me Thy Statutes” was nominated for a GRAMMY™ award.

Music critics everywhere invariably note his attentive and reverent attitude to the scores he performs.

“His conductor’s gestures are clear and devoid of any exaggeration whatsoever…” (James A. Altena, Fanfare Journal).

“Vladimir Gorbik is an amazing musician with his original vision and perception of the musical world.  Any of the symphonic scores comes to life in his hands.  He is able to captivate and lead not only the team, but also the audience." -  (Viktor Aleksandrov, https://musicseasons.org/venec-romantizmu/)

Lukas Geniushas will perform Tchaikovsky’s virtuoso and very unusual Concert Fantasy for Piano and Orchestra. He was born in 1990 into a family of multi-generational musicians.  He graduated from the Moscow Conservatory in 2013. <r. Geniushas is a Laureate of many prestigious competitions, including the International Competition, Chopin (2nd Prize, 2011) and the Tchaikovsky International Competition (2nd Prize, 2015).

The musician, whose performing style is distinguished by its "brilliance and maturity" (The Guardian), has given recitals worldwide in such halls as Wigmore Hall, Concertgebouw in Amsterdam, The Salle Gaveau Hall in Paris, The Louvre Auditorium also in Paris, The Frick Collection in New York, The Phillips Collection in Washington, D.C., The Teatro Carlo Felice in Genoa, Italy; the Verdi Hall in Milan, Italy and the Great Hall of the Moscow Conservatory.

We await you at our concert on February 3rd, which brings great Russian music and famous Russian musicians together!