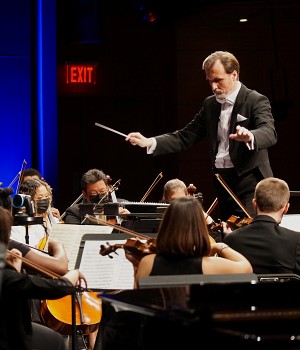 From Russia With Love

"Music of the Continents" is the name of an international project in which Vladimir Gorbik, Russian conductor and Associate Professor of the Moscow State Conservatory, participates. On October 17th, 2021, Maestro Gorbik performed with the Southeast Kansas Symphony at Pittsburg State University The latest performance of the Russian National Orchestra took place in the Great Hall of the Moscow Conservatory. At the helm was special guest conductor Vladimir Gorbik, Principal Conductor and Director of the Capital Symphony Orchestra and Senior Choir Conductor of the Holy Trinity – St Sergius Lavra.

Viktor Alexandrov: "With a Heroic Spirit"

The Capital Symphony Orchestra is a young ensemble, created in 2017 as an international project. Since its founding, it has rapidly established itself not only onstage around Moscow, but also abroad. On February 3, 2021, the Capital Symphony Orchestra conducted by Vladimir Gorbik with special guest pianist Lukas Geniushas will give a concert in the Great Hall of the Moscow Conservatory.  The Second ("Heroic") Symphony by Alexander Borodin and Peter I. Tchaikovsky's Concert Fantasy for Piano and Orchestra will be performed.

This concert program is both conservative and daring.  An epic masterpiece which largely determined the fate of Russian symphonic music, and a little-known, surprisingly fresh page in the history of piano concerts.  What unites these works?  First of all - the uniqueness of the Russian style and extraordinary courage in dealing with traditional European genres.  Tchaikovsky and Borodin harmoniously combined the features of different cultures and went - each composer in his own way - to acquire his own language and acquire the "Russian spirit" in their music.

The Capital Symphony Orchestra is a relatively young organization, created in 2017 as an international project. Vladimir Gorbik is the orchestra’s Founder, Artistic Director and Chief Conductor. Maestro Gorbik is also a senior lecturer at the Moscow Conservatory, and he has an extensive record of creative activities both in Russia and in America.  In 2019, one of Gorbik’s choral CDs “Teach Me Thy Statutes” was nominated for a GRAMMY™ award.

Music critics everywhere invariably note his attentive and reverent attitude to the scores he performs.

“His conductor’s gestures are clear and devoid of any exaggeration whatsoever…” (James A. Altena, Fanfare Journal).

“Vladimir Gorbik is an amazing musician with his original vision and perception of the musical world.  Any of the symphonic scores comes to life in his hands.  He is able to captivate and lead not only the team, but also the audience." -  (Viktor Aleksandrov, https://musicseasons.org/venec-romantizmu/)

Lukas Geniushas will perform Tchaikovsky’s virtuoso and very unusual Concert Fantasy for Piano and Orchestra. He was born in 1990 into a family of multi-generational musicians.  He graduated from the Moscow Conservatory in 2013. <r. Geniushas is a Laureate of many prestigious competitions, including the International Competition, Chopin (2nd Prize, 2011) and the Tchaikovsky International Competition (2nd Prize, 2015).

The musician, whose performing style is distinguished by its "brilliance and maturity" (The Guardian), has given recitals worldwide in such halls as Wigmore Hall, Concertgebouw in Amsterdam, The Salle Gaveau Hall in Paris, The Louvre Auditorium also in Paris, The Frick Collection in New York, The Phillips Collection in Washington, D.C., The Teatro Carlo Felice in Genoa, Italy; the Verdi Hall in Milan, Italy and the Great Hall of the Moscow Conservatory.

We await you at our concert on February 3rd, which brings great Russian music and famous Russian musicians together!

This concert is sponsored by the Fund for Assistance to the Russian Orthodox Church Outside of Russia.

Music Of The Continents is sponsored by the Fund For Assistance to the Russian Orthodox Church Outside of Russia.